NORTH HOLLYWOOD - Councilmember Krekorian and the Department of Recreation and Parks unveiled the first self-cleaning restroom in the city's park system in North Hollywood. Located at the North Hollywood Park Recreation Center, the pilot model of the self-cleaning restroom will help the department determine the best innovative and efficient way to improve visitors' experience throughout the LA City parks.

In December, Councilman Krekorian introduced a motion calling on The Los Angeles Homeless Services Authority to produce within 60 days a detailed account of its funding sources. Read the motion here.

Tackling the Crisis of Homelessness

The Los Angeles Homeless Service Authority recently announced the results of the 2019 point-in-time homeless count. The numbers revealed a 13 percent increase in homelessness countywide and a 16 percent increase across the city since last year. That means 58,963 residents across LA County lack proper shelter, and 36,300 Angelenos don't have access to housing.

This rising number of homeless people in our city is alarming but is no surprise. In fact, we can see the devastating and extremely frustrating impact of homelessness in our neighborhoods each day. This spike, however, is not unique to Los Angeles. Across Southern California and throughout the state, homelessness on average rose nearly 35 percent.

Despite housing a record number of individuals this past year in Los Angeles, and providing unprecedented levels of services and funding, the crisis of the lack of affordable housing and income disparity are outpacing progress and pushing more vulnerable individuals and families on to the streets. The biggest driver of people falling into homelessness is economic hardships.

What the results of the homeless count do show is that we need to focus not only on providing services to the existing homeless population but also on finding more ways to prevent families from falling into homelessness in the first place without any hope of getting back out. We can do this by focusing on making housing more affordable, addressing rising rents, preventing evictions and creating more good jobs.

Most importantly, this outcome is not going to diminish our resolve to see this crisis to an end. Instead, we are going to do even more to stop this inflow and support our vulnerable neighbors with the help they need to get back on their feet.

The Faces of Homelessness

We also want to shed some light on the true face of homelessness. We have all heard some myths and misleading generalizations about the homeless population, most commonly that homeless people are all "mentally ill criminals," "drug addicts" and "people who moved to the area from out of state" to take advantage of LA's homeless services. This year's Homeless Count confirms that these statements are far from the truth:

Homelessness in the Valley

Homelessness has increased across the San Fernando Valley, including in Council District 2. This underscores the urgent need to bring more immediate housing solutions and services to the San Fernando Valley. The needs of Valley residents must be front and center and Councilmember Krekorian will continue to make sure that our region gets its fair share of funding for the resources and services our community needs most.

While families experiencing homelessness in the East Valley saw a decline, a growing number of our aging population and transitional youth between the ages of 18 and 24, many of whom who have aged out of the foster care system or fled unsafe homes, saw sharp increases. Victims of domestic violence also make up a significant segment of the population.

Although the Second District has only a small fraction of the city's homeless, 98 percent are living in tents and encampments in our neighborhoods because we do not have enough housing to accommodate them. This is putting a strain on our communities and our most vulnerable residents. Placing people into secure and monitored housing, where they get a bed, along with health, mental health, substance abuse, and job training services is the best way to begin turning things around.

In the city's budget, we’ve set aside more resources than ever before to build even more units of housing, and expanded supportive services to our neighborhoods and that keep streets and parks safe and clean.

This year, aided by funding from the voter-approved Measure HHH, city leaders budgeted $457 million in housing and services for the homeless this year -- the highest amount the city has ever dedicated to the issue. This includes $281 million to construct 2,126 new units of affordable and permanent supportive housing. The budget added $3 million in funding for eviction prevention and homeless prevention services. The fiscal plan also doubles the number of city crews dedicated to cleanups.

While there is progress, it is not enough. We must move faster and treat this crisis with greater urgency.

Bridging the Gap Between Streets and Homes

If we want to end homelessness in our communities, we must be willing to accept shelter and services in our communities. With only one shelter in the Valley that is well outside of Council District 2, the number of homeless people sleeping in our neighborhoods will not diminish unless we act and act fast.

The city’s A Bridge Home initiative is an emergency shelter plan designed to create temporary housing sites that will offer immediate beds, showers, mental health and addiction services, restrooms, storage facilities, and pet accommodations, as well as around-the-clock, on-site care for Angelenos who are sleeping on the street now and awaiting supportive housing or other long-term care. The initiative is a critical piece of the overall effort to build a comprehensive system that will bring all homeless Angelenos indoors. So far, the three shelter projects are open with several in the pipeline for completion.

In Council District 2, Councilmember Krekorian has instructed city staff to look at two city-owned properties to see if they can potentially accommodate bridge housing for the homeless. The properties are located in North Hollywood and Van Nuys, the neighborhoods with the district's highest concentration of homeless individuals living in them. Once city staff comes back with a report on the properties, Councilmember Krekorian will share the findings with nearby residents and seek additional input before moving forward with any bridge housing proposal. In the meantime, we will continue to search for more potential bridge housing and permanent supportive housing sites in Council District 2 that can help alleviate the homelessness crisis in the San Fernando Valley.

A Bridge Home will greatly assist in this endeavor, and compliment the work Councilmember Krekorian is already doing in Council District 2 to get people off the streets, including initiating a safe parking program, building more permanent supportive housing units, and creating a navigation center that will connect the homeless with services and a place to store their belonging.

Safe Parking in Our Community

Councilmember Krekorian initiated one of the first Safe Parking Pilot Programs on city property in the City of Los Angeles. Under the program, the LA can use city lots or partners with places of worship and local businesses to designate overnight parking locations for the homeless; thus, removing these vehicles from neighborhoods and local streets. This program is another opportunity to give homeless people a safe place to sleep for the night and get connected with services.

To view the city's progress on supportive housing, visit hcidla.lacity.org/hhh-progress.

Another available tool in the fight to end homelessness is increasing the effectiveness of the federally funded Housing Choice Voucher Program, more commonly known as Section 8. Section 8 is a tool that cities use to help very low-income residents get quality, affordable housing, which helps keep them from falling into homelessness. But in Los Angeles alone, there are more than 2,700 Section 8 voucher holders who can't find a single unit to rent.

What's frustrating is that there are units available that don't get rented to voucher holders. Part of the problem is the pernicious stigma associated with Section 8 among some landlords. As a result, Angelenos in need wait years on a list to get approved for a voucher only to have the voucher expire before they can use it because they cannot find an apartment owned by a landlord willing to rent to them.

This is an issue Councilmember Krekorian believes can be fixed. That’s why he authored new legislation that outlaws discrimination against Section 8 holders in the city of Los Angeles and to find additional ways to increase the acceptance of the vouchers.

Read the LA Times article on my legislation: www.latimes.com/business/la-fi-section-8-ordinance-20190417-story.html

LA’s Rent Stabilization Ordinance protects tenants from excessive rent increases, while at the same time allowing landlords to increase rent each year by a fair amount. Tenants and landlord can learn more about what is covered under the city’s ordinance by accessing workshops hosted by the Housing and Community Investment Department. The ordinance regulates rent increases and evictions.

This year in the budget, we added $3 million in funding for eviction prevention and homeless prevention services.

Visit hcidla.lacity.org/What-is-Covered-under-the-RSO for more information about rent stabilization and evictions.

We’re regularly connecting members of our homeless community with services through Homeless Connect Days. Councilmember Krekorian started this event nearly ten years ago, creating a one-stop-shop with service providers, government agency providers, and nonprofits to work together with our unsheltered and vulnerable community to provide resources and service, including health and vision screenings, haircuts, showers, case management, and other supportive services. The program now serves as a model for the rest of the city and county.

The colossal task of end homelessness cannot be done without fundamental changes to more of our state and national policies that have been drivers of income inequality, created obstacles to housing and burdened everyday Americans.

In order for us to change this situation and get homeless people off the streets, we need your support. We need you to carry a positive message in conversations with your neighbors, co-workers and fellow business owners to convince them that it is in their interests to support the city's initiatives to end homelessness.

We will keep you updated on the actions we're taking to combat homelessness. This month, I launched a new program in the East Valley to beautify our neighborhoods and help our neighbors experiencing homelessness get a fresh start, called Clean Streets Clean Starts. We Want You: Nominations for Veteran of the Year 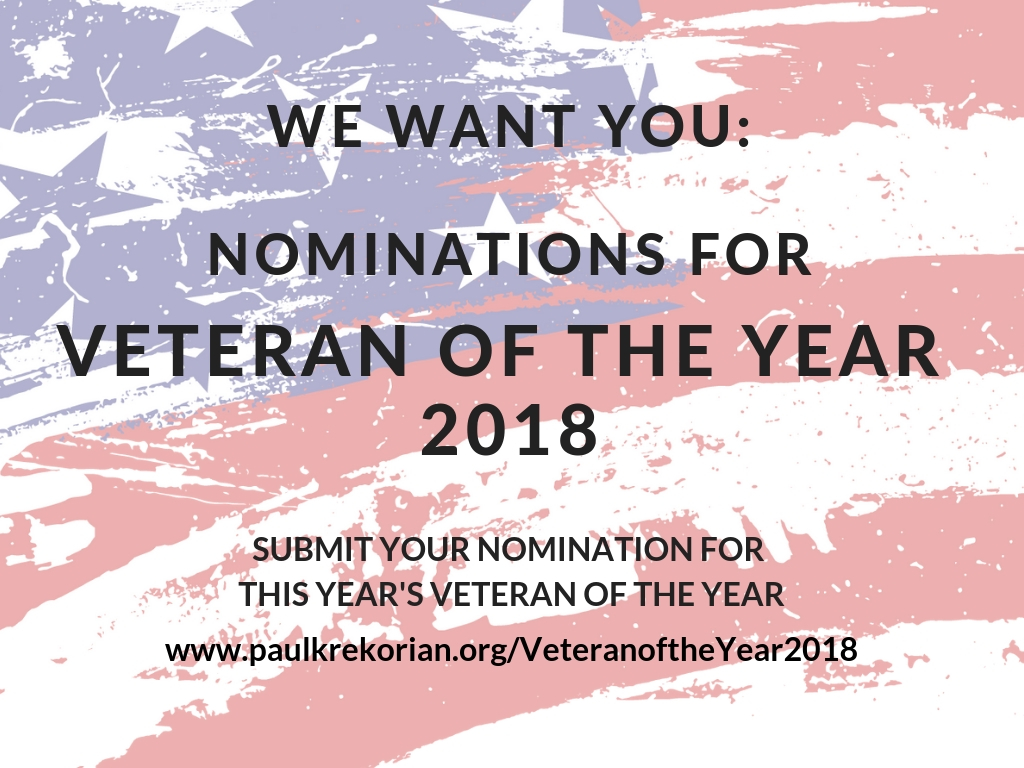 Every November, we celebrate Veterans Day in honor of the millions of brave Americans who have served in the Armed Forces. These ordinary men and women embody our greatest ideals of patriotism and freedom through their extraordinary service and sacrifice. It has been my honor to serve on the Rescue Mission's advisory board during my years on the City Council, and I was grateful to be honored by the organization last week during their celebration event.
Read more Taking a step forward in the City's fight to end homelessness, Mayor Garcetti officially opened the first "A Bridge Home" temporary bridge housing site this week. Located near the El Pueblo Historical Monument in downtown Los Angeles, the housing is the first of a series of projects planned for construction across the city to bring homeless people off the streets and into housing. Potential bridge housing sites across the city are being explored by every member of the City Council.

The Truth About Shelters and Homeless Services Homelessness is the biggest social issue facing Los Angeles and I am committed to finding sensible solutions to this crisis. While the crisis is regional, its impacts are felt in different ways in every Council District 2 neighborhood. Last weekend, I had the pleasure of breaking ground on New Directions for Youth's (NDY) Health and Recreation Center in North Hollywood. This was a special event for me because I have long supported NDY's work with at-risk youth. For more than 43 years, NDY has transformed tens of thousands of young lives by creating a positive atmosphere for children in the San Fernando Valley. NDY serves 3,000 youth each year and has provided free services for a whopping 90,000 people in our communities.