It was a big week for public transit, as we celebrated Bike Week and Infrastructure Week. As a City Councilman and member of the Metro Board of Directors, I used the week to promote active transit options for Angelenos and meet with U.S. Transportation Secretary Anthony Foxx about the ways that our local and federal governments are working together to move transit forward.

Locally, our city's transportation landscape has undergone a tremendous, positive transformation over the last few years. When you take a look around our communities, tens of thousands of Angelenos are biking, walking and taking the Metro to get where they need to go.

Where I live in the San Fernando Valley, this couldn't be truer. Not more than 10 years ago, people widely viewed the Valley as a suburb where car culture reigned supreme. The common misperception was that everyone drove everywhere and that no one was riding bikes, walking or taking public transportation. It wasn't true then, but it's just patently false now.

If you look around theValley, you see of cyclists and pedestrians on ourstreets and sidewalks, and you see far more mass transit than we've ever had before. We've got the Universal City/Studio City hub, the North Hollywood Red Line station, the Orange Line Bus Rapid Transit and a commute-cutting dedicated bus lane to get over the Sepulveda Pass to the Westside, to name a few.

We also just hosted the first ever San Fernando Valley CicLAvia open streets festival where more than 50,000 people biked on Lankershim and Ventura boulevards and had the chance to discover so many of our neighborhood gems. All of this shows that transit isn't just a fad in the Valley-it's altering the way people get around every day.

This week provided another opportunity to highlight new transit opportunities in the Valley and beyond. It was Bike Week, an opportunity for everyone throughout Los Angeles to ride a bike, go Metro and better connect with our city and each other in more active and sustainable ways.

It was also Infrastructure Week and I was proud to stand with Transportation Secretary Foxx, Mayor Garcetti and some of my fellow Metro board members to highlight the vital importance of continuing to modernize America's roads, highways and railways. We toured Metro's Division 13 Bus Maintenance and Operations Facility, a new, state-of-the-art facility that is being built downtown using local and federal funds. When it's finished, it will significantly improve bus service in the heart of the nation's second largest city. Click here for photos.

After the tour, Secretary Foxx stressed that the current federal multi-year transportation spending bill is set to expire in two weeks, and if that happens, Metro could lose critical federal dollars, putting projects like Division 13 in jeopardy. I think it's critical for Congress to act on this bill and help Los Angeles continue the transit transformation that's reshaping our city right now.

If you have any ideas about how to improve public transit options or better encourage people to utilize our Metro system, please email me at [email protected]. 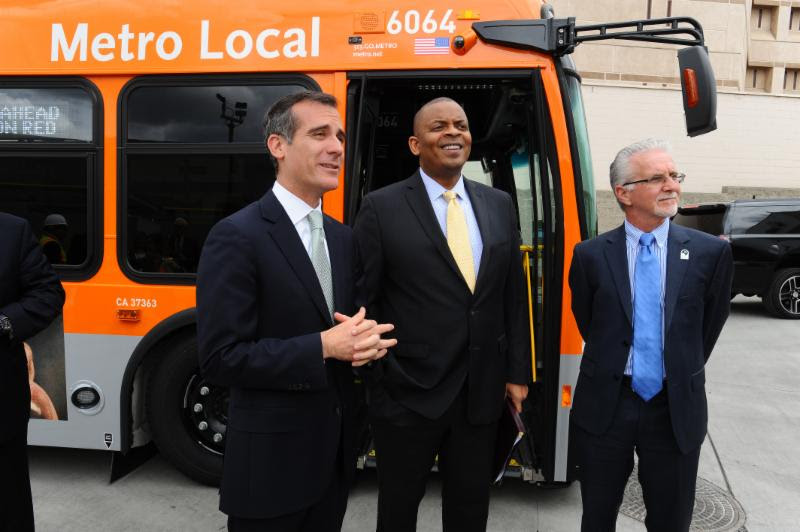